Motherhood is stressful, isn't it? I mean, so stressful. And I'm not talking about tantrums (she appears to have hit the terrible twos a bit too early, more on that later) or poo on your forehead or forgetting to buy nappies because your baby brain has yet to fuck off. The kind of stress I'm talking about is when you're baby gets sick.

Yes she's sick again. She still has a cold but now she has an ear infection. Nothing major but it's a massive deal for me. I have to watch her suffer and all I can do is drug her up on Calpol and give her ear drops. Mama's that have had to deal with worse are Superwomen. A sick baby is just heartbreaking.

One thing that was so painful for me yesterday when we were at the hospital waiting to see a doctor was watching her crawl around on the floor, playing with the toys in the waiting room. I was itching to antibac the place (I carry a pack of Milton antibacterial wipes in my bag, don't judge) and I did wipe her hands when she'd finished playing. Awful isn't it. I know she needs to come in to contact with germs to build her immune system but that place just freaks me out with its germs. 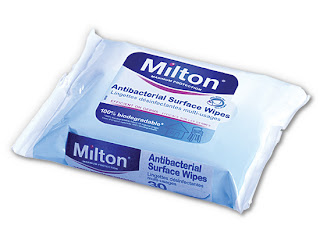 Ah the trials and tribulations of being a Mother.
Written by Charlotte at 7:55 PM