So she finally stopped screaming after three hours. Then woke up at 2:30 for a drink and again at 6:30. She's now sat in front of me holding her ears fast asleep.

I'm waiting for the midwife to come round, it should be Heather today but we'll see. I'm also on house arrest. Mother is on her way over and she'll be replaced by the nutty Grandmother a bit later. Let's see how that goes...

She's put on 2oz, the little fatty! All is well with her which is a relief and we've been discharged from the midwife. Next stop - health visitor.

Today me and the child have been lazy so far (or the child and I for those people that talk proper). Although I'm itching to get out of the house for more than just a walk around the block. Considering a trip to the shopping centre with the baby. Alone. Can't work out if I'm feeling brave or just full from all the chocolate based food I've eaten today. I shall report back on this tomorrow...

Written by Charlotte at 2:23 PM No comments:

Between feeding the little madam, winding her, getting her settled and getting the next bottle ready, I don't have much time. So I'm going to keep a mini diary for the blog and post it as and when until her feeds become less frequent and she doesn't demand my attention every minute of the day (she doesn't anyway, I just seem to be lavishing all my attention on her and neglecting my dirty black roots and eyebags).

So today is day 10 and my body is slowly adapting to the lack of sleep although I'm still in quite a lot of pain from the c-section. Husband is back to work tomorrow so have Mother and Grandmother on babysitting duties to make sure I do nothing all day. This is fine by me as after a rollercoaster week I'm ready to rest.

I've had the baby blues for the last few days which is something you don't really get told about. I've read about it but never really took much notice until it knocked me sideways the other day. I've thought about running away, moving away, locking the door and closing the blinds and dropping my phone down the loo, going to live with my Mum, screaming until I no longer feel down and ended up just crying and crying. It's awful. I'm so stupidly happy, I have this perfect little baby who I'm besotted with but I feel utter sadness. No reason. Just do. It's overwhelming, all these emotions and hormones on overdrive. For those pregnant or trying, be warned: you're going to feel absolutely horrendous for a few days. Maybe longer. Today was a good day for me but tomorrow might be a bad one...

It's 22:30 and she's been screaming for three hours. I think it could be colic as it's been going on for a few days now. I'm tired and ready to jump in front of a bus. He goes back to work tomorrow so it's not fair that he should deal with this. I tried to compromise with her - she shuts up and I buy her some toys. It didn't work.

As my best ginger friend says...fuck my life.

Written by Charlotte at 10:34 PM No comments: 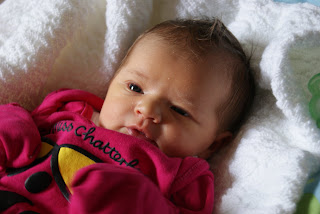 Well, I'm back. One week in to being a mother. Jesus has it been one very long and hard week.
Let's rewind shall we...
The last time I wrote to you all I was moaning about the lack of Coco Pops and waiting to be told my waters were going to be broken. That didn't go according to plan. At 2cm dilated STILL, I had to have another shot of gel, my final shot before we moved onto Plan B. Super majorly pissed off at this point.
Fast forward a few hours and praise the lord, the contractions had started. Wednesday was going to be the day I got this little madam out.
7pm and I was in agony. I'd survived a few hours on Codeine (that and the fact my pain threshold is pretty bloody high) but now was the time to move on to Pethadine. Before I was allowed more drugs, the midwife had to check if it was possible to get me onto the labour ward. Thirty seconds later, her head popped around the curtain and told me they were going to break my waters.
My mum nearly fell over.
8pm and my waters were broken (for those interested, I was mostly baby). Time for Pethadine (which didn't work) followed by a request for an epidural. The contractions were quick and very painful, surely this wasn't going to last any longer than a few hours? WRONG.
In a beautiful, blissful, fuzzy haze I dosed in and out of consciousness, catching snippets of conversation between mother, husband, midwife. Midnight came and went, I pressed the button for more shots of epidural and continued my journey through the forest that housed pink unicorns and oompa loompas. If you ever have the opportunity to experience an epidural, DO IT. Best feeling of my life (I tried gas and air, freaked me out). In between sleep and talking to yellow monkeys that were dancing around the room, the doctor came in and told me I needed injections to slow my contractions down as the baby's heart rate was very fast. More drugs, extra shots of epidural, lots of swimming around the room...
3am 'we're concerned about the baby's heart rate, it appears she's stuck too. You're 6cm dilated. The only option is a c-section...' Gasps of horror from Mother, tears from husband, a shrug of the shoulders from me. Let's do this...
4:12am on Thursday and I hear a shrill scream. It was all over so quickly. I dozed in and out of consciousness throughout the whole thing. I remember snippets of conversation I had with the husband and noticing the doctor was on his laptop. It was the weirdest experience of my life.
So just like that it was all over. I now had this tiny helpless little thing to look after.
That is my birth story. Nothing exciting. Although everyday something comes back to me, something

Well I got some sleep. The baby woke me up. The one in the bed opposite. Not mine. No, mines being a little bitch and won't come out.

I'm a bit of a mess this morning, part screwing because I'll have to listen to someone else's baby scream all day, upset I'm still carrying this lump, in pain with SPD, nervous because they seem to think my waters will be broken today although that's not 100 per cent going to happen, worried that it might not happen and I'll have to spend yet another day walking up and down the corridor to get things moving, pissed off they haven't got Coco Pops, tired, bored and in a general grump.

About to throw a) a massive tantrum b) this crappy orange juice at the midwifes head and c) myself out of a window.

Seriously, fuck my life.
Sent from my BlackBerry® wireless device

Written by Charlotte at 7:27 AM No comments:

I'm still in hospital.
After a very painful examination this afternoon (for which my mum went mental at the midwife) it would appear I'm 2cm dilated. So we have made progress.
The plan for tomorrow is breaking my waters. With a hook. Just a bit shitting scared. I don't want no Captain Hook breaking my waters. That's if I don't progress overnight anyway.
I thought I'd be done by now. Surely I've endured enough?


Written by Charlotte at 9:26 PM No comments:

Well I'm in hospital having been induced. It all happened rather quickly. Was sitting in the waiting room expecting to be told no room at the inn when the midwife popped her head around the door and said come back at four for an induction.
So here I am, laying in the bed in agony. AGONY. My contractions are regular and close together and I've only just had some pain relief - Codeine. I'm very brave, they hurt lots and are bloody strong.
There is a woman on this ward with a bad case of the burps. I mean BAD. It's disgusting. She's like a man and doesn't say pardon after every burp which is just rude.
Husband and Mother have just left to go and get some rest. Alright for some. If the Codeine doesn't work I can go straight to Pethadine. As my cervix is still closed they don't class that as 'in labour' but things could progress quickly. That gel is fast working.
I'm going to wait for the Codeine to kick in and try and get some rest. I'll update when I can but fingers crossed my next post will be tomorrow lunchtime saying she's out...

Another trip to the hospital, another hour on the machine. It looks like I have ANOTHER water infection, waiting for the results to come back. Back tomorrow at 10am for the same again. Rock and roll...

I'm currently sitting on the sofa with pains (the midwife said earlier she could 'feel it in her waters' that I was going into labour tonight) waiting for it all to begin (same as every night). She's now 3/5 engaged so she's dropped a bit more. Good news I'm told. Whatevs. They did offer me a sweep today but after the outcome of that on Thursday I politely declined. If they can give me some hardcore painkillers tomorrow I may accept.

Off to have a boiling hot bath. Let's see what the devil child thinks of that...

Written by Charlotte at 7:11 PM No comments:

After an hour on the monitor today to check the baby was ok the midwife told me that she is still very small and she wasn't happy about it (she'd measured with her tape measure again). She had to consult a doctor.

Three hours of worrying later, the conclusion: the bump measures 33cm and should measure around 40, heartbeat is strong but she hasn't grown for a while. It is not acceptable that yesterday I was booked in for an induction THIRTEEN days after my due date. Because of her reduced movement I have to go back tomorrow to be monitored at 9AM - ON A SATURDAY. They will then decide which day to induce me...Tuesday, Wednesday or Thursday NOT Friday. So this time next week with any luck I should have my body back.

So that's what I did today.

Oh. And the elephant foot has increased in size so it's leggings and flip flops for me (VOM).

Written by Charlotte at 9:59 PM No comments: