Statuses about how you miss someone who has died make me cringe. I hope that doesn't make me a horrible person, I just think loss is something very personal. But I'm going to go ahead and be a hypocrite because this post is about loss.

Today, I watched tartan-clad men playing the bagpipes and had to fight back tears. Tears of sadness, desperation, happiness, relief. I managed to fight it until we turned into our street and then I couldn't stop it.

I don't like Christmas. Even though I have a child who brings me so much joy, at this time of year especially. I've tried and tried to fall in love with it and have felt like a fraud imposing on someone else's fun. I'd happily skip it every year.

Ten years ago, on Christmas Day, my Grandad died. Sometimes, you don't realise how much someone has affected your life until they die. I didn't realise how close I was to him until he wasn't there to joke with anymore. I remember everything about him, his smell, how soft his hands were, his belly laugh and how it warmed my heart. I was 18 when he left. I woke up from a Christmas afternoon nap to the sound of the phone ringing and knew it was the call I'd been dreading. I'd spent the morning with him, he was unconcious, but I spoke to him. Kissed him goodbye and told him I'd see him tomorrow. I'd spent nights sitting up with my cousin and the nurse, talking to him, sitting by his side. Praying for weeks he'd recover. When he was conscious he'd ask me if I'd come round for tea and toast. He called me Charlie.

It broke me, his death. It's dramatic but it did. And I never truly recovered, because you don't after someone you loves dies. Do you? People roll their eyes when you get upset at someone who died a long time ago, but it's always going to make you sad. No matter who they were.

Last year, I visited a spiritualist church and he came through. He told me a bunch of stuff that stopped my heart for a second but I felt at peace. After nine years of waiting, I felt as though I could move forward and that maybe the nightmares would stop. And they did, up until a few weeks ago. And now I feel as though it's raw again and I'm desperate for a sign that it's all ok. It's been ten whole years, so much has happened, but it still feels like yesterday I was a girl cooking up elephants toe nails for his dinner. Eating chocolates off his tree and playing snap, listening to bagpipes and dancing like a loon.

Have I depressed you enough yet?!

If you're missing someone this Christmas who isn't here anymore, I'm sending you all the love in the world. Have a long, hard cry and write about your grief. Because sometimes, writing about it make its all better.

I have wonderful memories of Christmas Day as a kid. Because my parents divorced before I could understand what Christmas was really about (a shit load of presents, obviously), every year I got Christmas x 2. Both were very different.

From what I can remember, most Christmas days were spent with my Mum. We'd get up at the crack of dawn and start the unwrapping fest. It was pretty much just go for it. We never opened one at a time while the others watched or took it in turns. We'd literally just tear the shit out of everything, screeching with joy at all the toys and books my Mum had slogged her guts out to afford. She watched on with glee and we'd smother her in kisses and thank you's (I got that bit right, right Mum?).

At my Dad's, it was a different affair. We'd take it in turns to open a present, it was very civilised. Not my cup of tea at all. But those were the rules and we played by them. Screeching with glee still but every ten minutes instead. 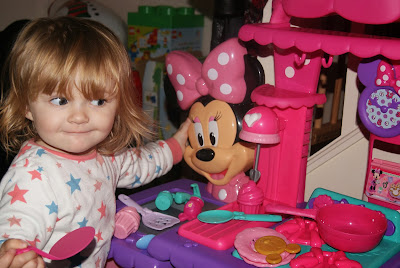 Waking up to my dream kitchen last Christmas.


This year however, this year things are going to be different. This year we are doing it how I did it as a kid. She's old enough to understand shit these days. She gets excited and screams with delight. It's how she should be, it's how this Christmas is going to be. Full of screaming and squealing and tearing open paper like there's no tomorrow. 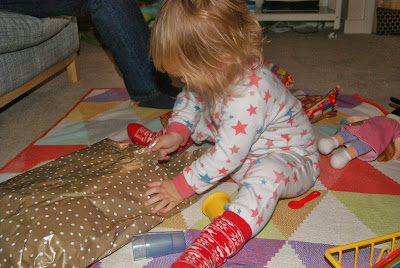 
Civilised present unwrapping is for adults and let's be honest... there are no adults in this house.
Written by Charlotte at 1:45 PM 1 comment:

I'm pretty much raging today. It all began with a message from someone yesterday morning, singing my husbands praises because he WORKS SO HARD. Yes, I know he does. We used to work together and I'm married to him. I know. He recently won an award in his industry which was a long time coming and he deserved the award and all the recognition for his hard work. I'm proud of him. If he didn't work hard, we wouldn't be able to live in this nice house and have nice things. HE WORKS HARD, OK?

Anyway, like I said... raging. I got back from the gym last night to a sink full of washing up. Here's something you don't know about me: I cannot start cooking if the sink is full of dirty dishes. I cant do it. I thought perhaps once I got back from the gym, the sink would be empty. Seeings as I was going to cook dinner on my return. I thought wrong. I was annoyed. You could have done the washing up while I was out. I had Lil. When I have Lil, do you think the fucking cleaner comes round and does it all? Or even better, the fairies (we dont have a cleaner by the way)???? It wasn't important. I was going to do it once she was in bed. She is in bed now and you still haven't done it!!!!!

I know it's petty. And that spending time with his daughter is more important than chores. But I manage to do both e v e r y  s i n g l e  d a y. I don't ask you to do the housework, he muttered. YOU FUCKING WHAT? And on it went until I went to bed in an almighty rage and woke up in a rage and am still raging.

I am a Mum who stays at home to look after our child. I am also a Mum who keeps this house clean and (sometimes) tidy, who meal plans and cooks and ploughs through sometimes three loads of washing a day as well as irons things that need ironing. And guess what else... I'm starting up my own business. And, most importantly, I spend time with our daughter. Raising her, teaching her how to write letters and numbers, reading with her. And I still do the fucking washing up when it needs doing. And I get no recognition for my hard work. No awards. My daughter can't say the fucking alphabet because her Nanny taught her (she doesn't have a Nanny) and she didn't write some of her alphabet because Squiglet came round on her tea break to show her how to write e and r and v. That was all me.

Nobody says to me, oh Charlotte you are doing a wonderful job. She is such a credit to you, you're a brilliant Mum. You work so hard (except my Nan, she always says that). I'm not bitter, far from it. I'm just annoyed that apparently, if you don't earn a salary then you aren't hard working. And I think that's unfair. So, people who earn salaries... don't forget us Mums and Dads who stay at home to look after our children. Just because we don't go out to work, does not mean we don't work hard. Far from it, in fact.

Actually, I'm going to make a bold statement and say we work harder.
Written by Charlotte at 4:29 PM 4 comments: