When people ask me how I feel now, I just say 'fine'. Mainly because I can't be bothered to reel off the list of dramas going down with my body. Really, though, there is nothing fine about how I feel so I'm going to bitch about it here. It's what this blog is for, anyway.

Shall we start from the head and work down? Ok, good idea. Well there isn't much to report on that area of my body at the moment but I'm having mental heartburn which is mainly brought on by chocolate. Steering clear of chocolate right now is not easy. Some days I think 'ah fuck it' and just ram a bounty down my throat but the consequences are not pleasant. What does help the heartburn though is pickled onions. Oink.

Leaky boobs, yo. Sexy, sexy leaky boobies. There isn't much else to say about my melons other than they are HUGE and veiny. And leaky. I ooze sex right now don't I?

The baby is all up in my grill (ribs) all the time. I lose count of how many times I catch my breath when this kid decides to kick me straight up in the bones. And ribache is a joke, bras are my hell.

My pelvis is crunching (crumching, crunch, crunchie...mmmmm CRUNCHIE bars) like a mother every time I move, my hips ache, my lower back hurts real baaaaaaaad. SPD isn't the most fun thing in the world, I forgot just how unfun it is. Shoulda just read my blog back from the start before I decided to have another bebe init. Bit late now.

Let's not talk about piles. Or constipation. Or leaky wee valves.

I have restless legs and they cramp at night. Varicose veins are taking over my life. My ankles swell.

And I rage. I rage and rage and rage like hurricane Charlotte (has there been one of those yet?). But I'm happy, happy that I only have 12 weeks left (I will not be going over 40 weeks), excited to meet this little monster who leaves my insides bruised... I'm fine.

Written by Charlotte at 9:20 PM No comments:

What not to say to a pregnant Mother

"Are you sure there is just one in there?" Do ya know what? Yes I am fucking sure. I mean, unless I'm actually BLIND, I definitely saw just one baby in there and I've been told there's only one by a MIDWIFE, no less.

'You look huge." There's a baby in there as well as all the shit that was in there before I was pregnant, I'm only going to get bigger and more uncomfortable which means more irritable too. Don't piss me off.

"Should you be eating that?" I shall eat whatever the hell I want, my body is working its socks off to grow this baby and if it wants half a cheesecake followed by a jar of pickled onions then it can damn well have it.

"You're not having a great time are you?" No, I'm not. But you don't need to tell me that. I'm only the one carrying this baby, it's my vagina that hurts, my boobs that are leaking, my pelvis that crunches every time I turn over in bed, my legs that feel like they're going to fall off, my piles that are my new BF...

"Oh god, you have ages left." And you're going to have a black eye in a minute. I do not need reminding that I have a way to go yet, I am carrying this lump and I have a calendar.

Probs best you just don't talk to a preggo, to be honest.

Written by Charlotte at 7:51 PM No comments:

Back when I was a clueless, pregnant 25 year old (still pretty clueless) I bought a baby carrier from a high street store. It was in the sale and wasn't particularly nice to look at but that's not what it was for and anyway, everybody would be too busy admiring my beautiful baby to notice the fugly carrier. Fast forward to Lil being born and she was not a fan of fugly carrier. She wanted to be close to me AT ALL TIMES, she'd made that very clear, just not in a bloody carrier. It's safe to say pretty much nothing got done during that phase.

This time, I've been doing lots of research on slings and baby carriers and had an idea at which one I was going to buy but then I came across Sling Studio, thanks to The Calm Birth School. They were holding a giveaway and after looking at all their lovely slings and carriers, I entered. And hurrah, I won!

I'd never heard of these guys before so did some digging. Sling Studio was started up by Alicia back in 2012...


"I started the Sling Studio in 2012, inspired by my own experience of carrying my daughter Mariel in a sling and my love for textiles and British manufacturing.
Like many new mums, I found the early days of motherhood both joyful and overwhelming. When a friend showed me how to wear my beautiful new baby in a sling, I found that I could keep her snuggled close, but regain the physical freedom to carry on doing the things I loved.Ever since then, slings have played an essential part in my parenting.
Having spent my childhood in Yorkshire I was, from a young age, aware of our country’s wonderful mills and heritage in producing the finest textiles. The decline in the British textile industry caused me to believe passionately in ‘made in Britain’, and that is why I took the decision that all of Sling Studio’s products should be manufactured in the United Kingdom. In fact, the vast majority of the yarn used in our baby carriers is produced, spun and dyed in the British Isles.
My dream is that the Sling Studio’s beautiful baby carriers will play their own part in the revival of the British textile industry, whilst introducing more parents to the joy of ‘hands free hugs’." 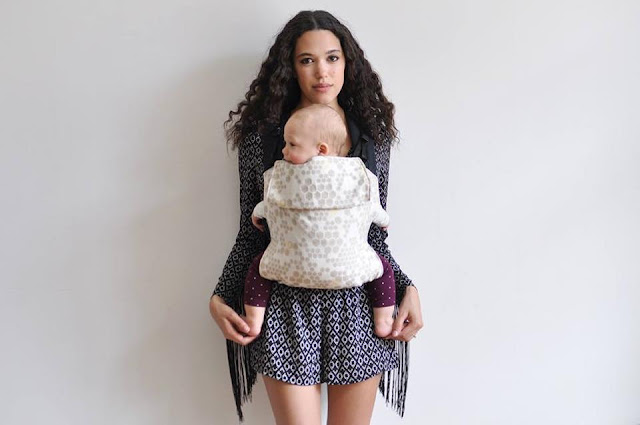 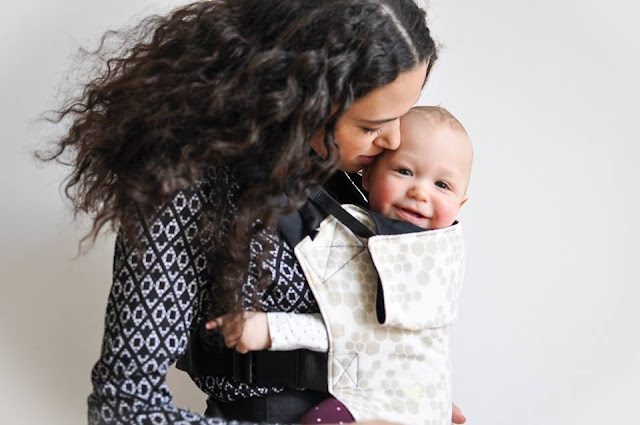 I'm not the most patient person in the world and wondered how difficult it would be to put the carrier on. Surprisingly, it was super easy. I used one of Lil's dolls to test it out and it took no time at all to strap the weird, plastic thing onto me (the doll not the carrier). And the carrier is SO comfortable! The fabric is not only beautiful but very soft and I'm super excited to use this come Autumn (the falling feathers print is just perfect for my favourite season). 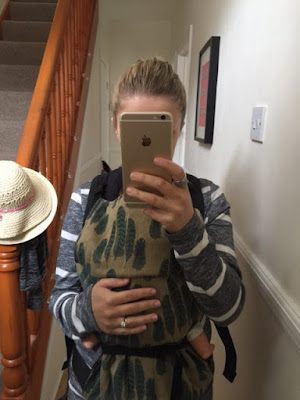 Not a great picture, just look at the fabric though!

I mean, I need to practise putting it on and making it look neater but you kind of get the gist.

But why baby wear? I cam across a great article here about the impact of babywearing on postnatal mental health. We are all at risk of developing a mental illness after birth (last year the Royal College of Midwives reported that nearly 60% of mothers felt down or depressed after giving birth). Babywearing has been cited (by mothers, no less) as having an impact on their mental health. Read the article, it's brilliant. You can also read about this from the health providers point of view here.

You can find an overview of information on babywearing here.

If you're looking for a baby carrier but don't know where to start, you can check out Sling Studio on Facebook and the lovely Alicia will be more than happy to give you some advice. Thanks Sling Studio for making baby wearing so much more comfortable and easier!
Written by Charlotte at 11:52 AM No comments:

It's amazing what a difference a tan makes. After a week in Ibiza, I felt pretty chilled out and less stabby which is always good. Except now that feeling has gone and I'm back to grumpy.

I've really started to embrace my changing shape although I'm still not so completely comfortable with the weight gain (on my legs especially) but I keep reminding myself it isn't forever. And anyway, it'll be cold when this little one arrives so I'll be able to hide the post pregnancy bulge in baggy jumpers. Cut me some slack, I'm as vain as the next person.

Movements are increasingly stronger and I've had some pretty violent kicks that have been quite uncomfortable and have been sure an arm or leg is going to appear out of my vagina sooner than it should. That's a very strong baby I'm carrying. Heavy and strong.

I haven't had much to grumble about EXCEPT for the excrutiating back pain (although I'm generally grumbly at the moment, UGH). Getting comfortable takes a while and I know it's only going to get worse as time goes on but it's not bothering me to the point of tears, yet. I've been wearing a sexy SPD belt to try and relieve the pressure but it isn't helping with the pain.

Pregnancy exhaustion has reared it's ugly head again and I'm also anaemic so I've been glugging floradix like wine (barf) and have made the relevant changes to my diet. Yawn.

Whilst on holiday, I read Ina May's Guide to Childbirth and had my eyes opened to so many amazing births. Before my appointment to discuss Lil's birth at 16 weeks, I walked into that room adamant I was having an ELCS this time. After leaving the room I wasn't so sure but after reading her book I am now preparing to discuss and plan a birth in the birthing centre at my hospital. This kind of birth isn't normally available for women who have had a previous section but I can't let this go, it's something I feel really passionate about after reading that book and I have a supportive SOM on my side. I wish I'd have known about it when I was pregnant the first time round, I'd like to think things would have ended differently but I can only use my experience and what I've learnt to change how this one will turn out.

I've had a couple of anxiety attacks this week and have wanted to crawl under a rock. I can't put my finger on the cause but it certainly isn't the baby. Maybe it's Lil starting school, who knows, but I'm hoping they were just random ones.

Clothes. Still not much of an improvement on the shopping front although I was quite pleased with the bits I took on holiday. I've been scouring ebay too and have found some amazing maternity bargains. 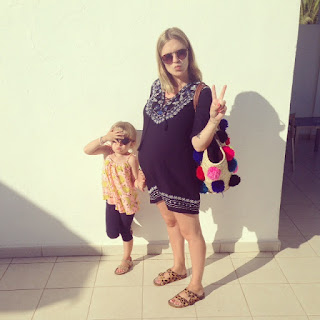 Hopefully by next week the irritable grump cloud will lift and I'll find my sense of humour again (it's probably hiding at the bottom of the huge ironing pile that isn't getting done... COUGH COUGH DEAR HUSBAND).
Written by Charlotte at 4:52 PM No comments: