Lil has been sick for almost a week. She's on the mend but she still isn't quite right, her tummy isn't fixed yet.

The effect this has had on me is quite brutal. I'm mentally, physically and emotionally exhausted. I know Mama's out there have to deal with worse, but this was a pretty big deal for me. I haven't experienced anything like this with her before, and I'm pretty sure it wont be the last time. But it was hard.


The house is a mess, there is clean washing still waiting to be put away after two weeks. The ironing pile is a joke, there are toys everywhere, the whole house needs cleaning and tidying, My head is fuzzy, I have a ton of thank you cards to write, to do lists to make. I swear I've forgotten a hundred things this week already. 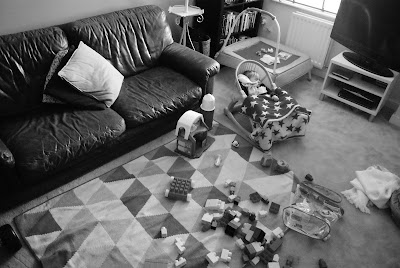 A small portion of the mess. Note the sleeping baby.

I know it's the babe that's sick and she's been in pain. I'm crushed I can't do anything for her, I'd go through it for her if I could and being sick makes me cry a lot. I mean, vomiting just ain't fun. But maaaaaaaaaaaaan. My head hurts. I can't think straight. The routine I've worked so hard to established is now non existent. I can only watch her Elmo DVD's so many times before I want to smash the TV and if I have to watch Rihanna's 'What's my name' video one more time (she's obsessed 'ohh na na, oh na na - parent of the year I am not).......


A week on the beach with no phone, TV or computer sounds bliss right now.

Anyone up for that?

Written by Charlotte at 2:30 PM