This morning has been a write off. I witnessed the most violent tantrum from a (not so) tiny 21 month old and in the process had a chunk ripped from my neck. I do believe folk call this the terrible twos. Fan-fucking-tastic.

With just over two months until she turns two years, I feel robbed. What bastard invented tantrums, hmm? Who dubbed it the 'terrible twos' because they got it bloody wrong. Try the god awful, vile twos... 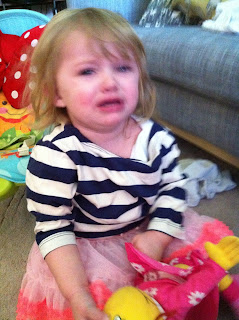 
I tried to stay calm whilst watching my child wreck the lounge and occasionally ducking as she threw stuff everywhere, I really tried. But tipping over her art easel kinda did it for me because of the sheer force. Possesed, a livid little being. So I lifted her up and took her upstair to her cot, being kicked and scratched in the process, and calmly (pah) put her down. Twenty minutes later, she had collapsed into an exhausted heap and was snoring.

Let's hope this afternoon is better for us otherwise I'll be declaring dry January officially OVER.
Written by Charlotte at 11:49 AM