When I was pregnant, I suffered from Symphysis Pubis Dysfunction. It was the most uncomfortable part of pregnancy; morning sickness I could sleep through but SPD was, at times, excruciating. At my first osteopath appointment, I asked Elliott if he had treated any pregnant women with it and what he knew about it. He was kind enough to email some information over for me to share on this blog.

Symphysis Pubis Dysfunction can be incredibly painful. There are three moveable joints in the pelvis that really, don’t move very much at all. For the majority of the time, the pelvis fulfils its function in transmitting force from the legs and supporting the pelvic organs, however the changes occurring in pregnancy mix things up a little.

During pregnancy a hormone called relaxin is released to increase joint mobility so that the pelvic cavity can expand during labour. This is possibly one of the reasons women may suffer from joint pain during their menstrual cycle, as the joints then rely on muscular rather than ligamentous support. The surge of relaxin leads to greater mobility of the pelvic joints (one at the front just by the bladder, the other two lie just under the small dimples on your lower back).

Due to the force coming up from your legs and transferred to the pelvis, the change in weight bearing during pregnancy, the effect the baby has on the abdominal musculature and organs, the pelvis becomes more vulnerable to the effect of asymmetrical load leading to changes in joint mechanics and then pain. 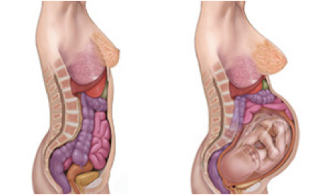 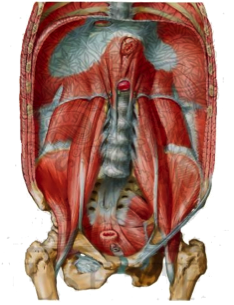 That is the complicated part. As osteopaths we simply detect the asymmetrical force or tension (i.e. a shortened back muscle or inactive abdominal muscle) and we try and establish balance. This could be with stretching, manipulation etc. We then prescribe exercises to stabilise the change that has been made. These exercises can be very gentle but effective.

An osteopath quite active in treating pregnant women is Caroline Stone. Read up on her work if you are interested in learning more about SPD. For more information please don’t hesitate to contact us at Revitalize.